The latest quarterly results from the Big 3 foodservice distributors (Performance Food Group, Sysco and US Foods) provide ample evidence of the hugely adverse impact the Covid-19 pandemic is having on the foodservice industry.  All three companies suffered significant declines in volume and profitability and lost money during the second quarter of this year¹; as shown in Exhibit 2, their organic sales and case volume trends are a clear indicator of dismal industry conditions during the April – June period, during part (or all) of which time most markets were under voluntary or mandated closures and/or severe access and operating restrictions. 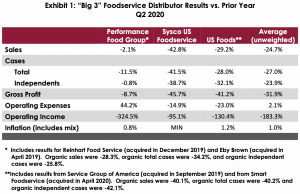 To their credit, the Big 3 acted aggressively and rapidly to enhance their balance sheets, improve working capital management, reduce their fixed and variable cost structure, pursue profitable new business, diversify their revenue streams and support their key customers.  Despite a cratered economy, massive uncertainty, deteriorating margins (as illustrated in Exhibit 3) and diminished near and intermediate-term prospects for some of their businesses, the companies now have much greater liquidity and structurally lower expenses which will likely enable them to gain market share for the foreseeable future.

A few additional comments and observations relative to market conditions and distributor performance:

During analyst presentations, senior management of the referenced companies cited a sequential (albeit spotty) improvement during the quarter, a belief that they are doing relatively better than the industry as a whole, and some level of optimism about the industry’s near-term recovery prospects.  While Pentallect recognizes the long-term growth potential of foodservice, we expect the industry rebound will be very protracted, with a return to overall pre-Covid levels unlikely prior to 2024.  Further, we  believe that a number of segments, most notably travel and leisure, will be permanently impaired.  And, unfortunately, we anticipate that operator closures and distributor failures will accelerate over the next several months, absent additional and substantial government relief.

² Revenues for Compass and Sodexo were for North America.