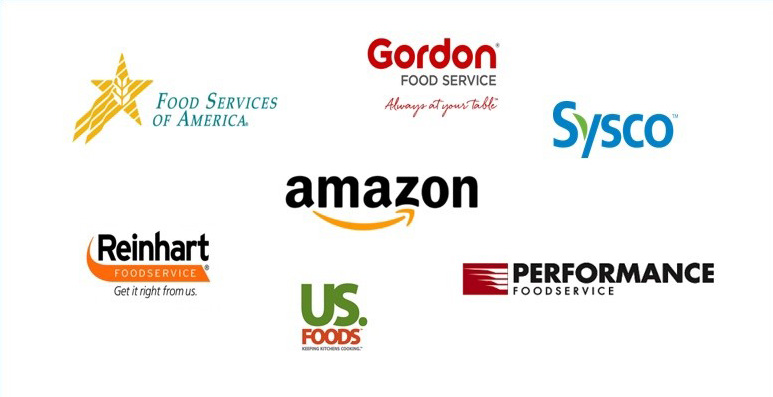 One if by Acquisition and Two if by Internal Expansion

In a refrain similar to Paul Revere, according to many analysts, Amazon is coming to foodservice and it’s time for distributors to shore up their defenses. No one can question that Amazon has the skills and resources to disrupt mature business models and take a meaningful share of the markets they enter. Much has been written since the agreement by Amazon to acquire Whole Foods. Grocery retailers and foodservice distributor stock values have declined since the announcement.

In reality, Amazon has been delivering to foodservice operators for many years. They have predominantly stayed within their core capabilities, typically servicing dry goods to foodservice operators in reasonably small quantities. In addition, they serve as a re-distributor of sorts to many independent distributors on low volume, hard to source unique SKUs. They continue to expand their reach via Amazon fresh, but are still not a “broad line distributor” in the traditional sense of the word. Total online sales to FS is difficult to accurately track, but the current Pentallect estimate is approximately $3 billion.

Certainly, if Amazon buys an existing distribution network, (which Pentallect does not foresee) they would instantly become a more traditional competitor with a relentless focus to build upon the scale, customer base, capabilities and facilities of the acquired company and start to “re-engineer” from there.

There are some realities of the foodservice distribution model that should be kept in mind.

• First, the size of operator purchases by independents is approximately $100-110B*.

• Further all independent operators are not created equal. The smaller and mid-size independents, those likely to be a target for Amazon, already purchase a share of their goods from non-traditional distribution including Grocery stores, Club stores, and Cash N Carry outlets. So, these alternate distribution operations would likely be the first and most impacted by a more aggressive Amazon in foodservice.

• Also, we cannot overlook the realities of drop size economics. “Costs to serve”, including warehouse costs, time and miles driven to deliver, order quantities, proximity to other stops and dollar value of the order are some of the variables that contribute to operating costs, provide services to a customer and, along with pricing, determine customer profitability. To be sure, foodservice distributors have been employing continuous improvement efforts in all aspects of their operations and for the most part have been increasingly efficient.

It is highly unlikely that Amazon, unless they enter the market via acquisition, will initially garner much business from the largest chain operators in the industry who require much larger drop sizes, often use an operator brand and already receive aggressive distribution costs reflecting their efficiencies. Therefore, custom distribution seems the least likely near-term Amazon competitive targets, followed by other chains and many large independents or LLOs (local leverage operators). This leaves the smaller and mid-size independents as primary targets…..initially. It should be noted that recent research with the smaller and mid-size operator base does not indicate a growing demand for online ordering. When surveyed, the majority of independent operators indicted they expected to order the same amount online over the next 2-3 years, as they do currently. Equal numbers indicated they would use online more, as those who indicated they would use online less.

What is more likely to be on the list of things more likely to change, even just based on just the possibility that Amazon may be a competitor, are some of the ways that distributors (especially broad line distributors) interact with independent operators.

• Most vulnerable seems to be the DSR model as “live” sales people typically don’t fit in any of the Amazon business models and are “costly to employ”.

• Another significant practice Amazon will challenge are traditional pricing models to independents. Price matters to independent operators, who are frequently higher cost-to-serve customers, pay higher prices and are always looking for pricing transparency and savings opportunities. This price and thus margin pressure has been identified by the analysts as a “profitability risk” for distributors going forward. Amazon has their pricing algorithms (as do some larger broad-line distributors) which tend to reflect a lower cost business model.

• A third and continually evolving area where Amazon can potentially make an impact on the industry is data. Industry trading partners are constantly looking to improve the use of data, data sharing, historical data and other value-added components that may reside in Amazon’s cloud. Traditional distributors have inconsistently managed data with some driving inefficiency for suppliers by not using electronic data sharing methodologies.

As mentioned in many articles, unless Amazon acquires a substantial foodservice distributor, they can be expected to impact foodservice through increasing share of home delivered meals from supermarkets, through influence to change some of the higher costs associated with the current foodservice distribution business model, and they will continue to make efforts to increase their online sales.

Pentallect believes plans to counter any increased Amazon disruption are a “critical strategic issue” for FS distributors and should be included in their strategic plans, along with more continuous improvement. It is likely that foodservice distributors will have a window of time to make adjustments to their business model/practices to better prepare and position themselves to deal with the eventual arrival of Amazon or its influence in broader foodservice distribution.